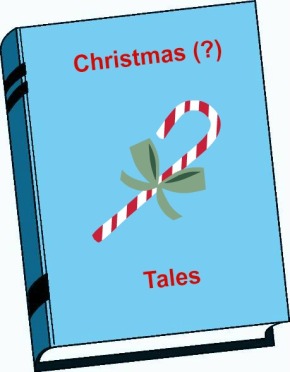 With continued apologies to Mr. Dickens, I offer my third story in the series of futuristic peeks into the characters of his lovely novel. Although I wrote these stories a couple years ago, I’m enjoying reposting them for a fresh reading this season.

`
# 3 The Spirit of Christmas Past: Request For Transfer
`

“Mr. Alexander, the Spirit of Christmas Past is here for his 2:00 appointment.”

As the door opened, his boss could see that Past was unhappy.

“I get a lot of good reports about your work. But you look unhappy. Is something wrong?”

“Well, Sir, I was wondering if I couldn’t trade places with Christmas Present for a while.”

“But you’re an expert at what you do, Past. Why would you want to have to learn a whole new job?”

“Well, I have to admit that I hadn’t given that point any thought, Past, but you don’t need any of those devices in your work, do you?”

“That’s just the point, sir. I don’t need any of those things in my work, so I get none of the fun involved with using them. And there’s something else that’s just recently come out – a brand new thing-a-ma-jig that they call Google Glass. Wow! It looks like a blast!”

Mr. Alexander just shook his head in consternation. He didn’t understand all this new-fangled equipment either, but that fact hadn’t bothered him before now. Maybe he was starting to fall behind himself. He looked back at Past, unsure what to say because he knew there was no way The Boss would go along with moving Past to a totally new time dimension.

Past looked at him hopefully. “It just isn’t fair, Sir! And that’s why I’m asking for a transfer. I was sure you’d understand when I explained.”

Mr. Alexander leaned back in his chair and looked at Past kindly. “Let me think this over for a bit, Past, and, of course, I’ll have to run it by The Boss.

One week later, Past walked back into Mr. Alexander’s office, having been summoned there to discuss the troubling issue again. When he arrived, he saw several gaily wrapped packages of various sizes on Alexander’s desk.

“Have you just finished your Christmas shopping?” Past asked.

“Not exactly, Past, but I have been doing some shopping for some special gifts.”

He motioned to a chair in front of his desk. “Sit down, Past, and I’ll tell you about these packages.”

Past took his seat, his eyes alight with excitement, and Mr. Alexander stood with his hand on top of one of the larger gifts. “The Boss said we just can’t possibly reassign you to a different job. You’ve been trained specifically for what you do, and you bring centuries of experience into every case you handle. So we need you to stay where you are, Past.”

Immediately Past’s mouth drooped and his eyes lost their light, but before he could say anything, Alexander continued.

“But The Boss and I also understand you naturally feel cheated in certain areas because of the need to focus uniquely on people, facts, and events from a dimension of time that has none of the benefits of the present day. You don’t get to spend any time in the present, and certainly have no possible involvement in what’s coming down the road in the future.

“So –” he turned and lifted one of the gifts, smiling at Past – “we felt the least we could do was to give you some of the devices that you’ve longed for the last several years. You may not get to use them on the job, but you can have fun with them personally in your time off.” At that point, he handed Past the gift he’d been holding.

“Receive this with our deep appreciation for the terrific job you do, Past. And all these other packages as well,” he added, sweeping his hand over the entire collection. “There’s one of everything you mentioned to me in our last meeting, and we hope they will, in some small way, make up for all that you’ve missed out on.”

Past was speechless. He was barely able to reach out and take the package from his boss’ hands. “I’m … I’m … Well, I just don’t know what to say,” he stammered. “All of these are for me?”

“Indeed they are, Past. Enjoy them as much as you can. It’s the least we can do for you considering all the people you’ve helped and the lives you worked so hard to change for good during your many years of faithful service in the … well … the past.”

A message of good cheer is what we want here. Please don't go away without leaving a Christmas greeting. Cancel reply

It’s All About JESUS!

Enjoy these Images of Christmas

PAGES ON THIS SITE