“Long lay the world in sin and error pining, ’till He appeared, and the soul felt its worth.” (‘O Holy Night’ by Placide Cappeau de Roquemaure)

These words are familiar to most of us as part of a Christmas carol — a song we hear only during the month of December each year and then put away with all the other Christmas trappings.  But this song, especially this particular line, has so much to say to the human race beyond “Merry Christmas.”  The enormous revelation contained in these lines is a vital and eternal truth that affects the lives of every man and woman born into the world.

After the human race’s rebellion against their Father God, the whole world lay in deep darkness and the death grip of sin and its resulting curse. Even man’s intellect had become twisted — a prisoner of error and vain imaginations. The souls of human beings had absolutely no concept of their value or of the unfathomable love for them still in the heart of their Creator.  They were confused, afraid, tormented by the evils let loose in this world by their own sin.  They were without escape, without hope. Until HE came.  God Himself — who had created them, born their betrayal, but loved them beyond it — offered HIMSELF in payment for them.  He purchased their freedom from their own self-made dungeon with the only source of payment rich enough to be acceptable — Himself.

With the appearance of Jesus Christ, to fulfill His appointed work of pouring out His own blood to release men from their own sin, light burst through the darkness and revealed the value of the human soul in all its glory — as surely as a bright light causes the facets of a diamond to burst forth in shafts of light that reveal its value for all to see.

HE has appeared!   FOR YOU!   And He didn’t come with the expectation that we would celebrate that coming only once a year.  No, He came so that we could understand how precious we are to Him every single day of our lives.  When we’re good; when we’re bad; when we’ve got it all together; when we’re confused and going under for the umpteenth time. He came when we were totally rebellious and unlovable, and that says it all: it says you are the most important thing in the universe to Him

So don’t wait until next Christmas to think about His coming.  He comes to you continually.  He comes to whisper love words and life-giving truth.  So today — right now — open up your heart anew, and let your soul reach out and receive the revelation of how priceless you are to the God of the universe!

Let this version of “Oh Holy Night” by Josh Grobin inspire and comfort you today.

2 thoughts on “What Are You Worth?”

A message of good cheer is what we want here. Please don't go away without leaving a Christmas greeting. Cancel reply

It’s All About JESUS!

Enjoy these Images of Christmas

PAGES ON THIS SITE 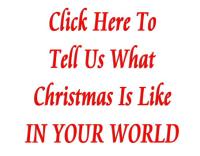